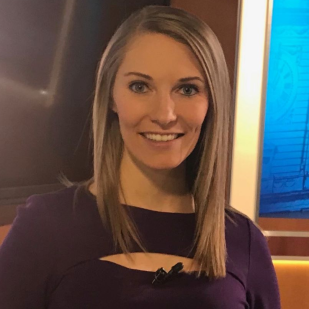 13 Fascinating Facts About Me:
1. Despite all my talk about Nebraska, I am actually from western Iowa. I grew up cheering on the Huskers as my dad is from Nebraska and then received my Bachelor’s degree in Meteorology from UNL in 2014. Since coming to central Iowa, I have developed a love for SOME Iowa sports teams.
2. I got married in June of 2019 to another meteorologist. (yes, we talk weather at home) More importantly, we have a corgi named Fitz who has stolen the hearts of not only us, but many central Iowans who have come to know him. You can follow him on Instagram (@fitz_corgi)!
3. Central Iowa’s craft beer game is (as the young people say) LIT! My husband and I are HUGE craft beer fans and love hanging out at the local breweries.Feel free to come up and say hello if you see us out and about!
4. Reading is one of my favorite things to do outside of work. I have recently opened up about my mental health on social media, (Check out this link for the full post https://bit.ly/2XT0Ww9) and reading is one of my favorite ways to relieve stress and anxiety. I am a big fan of the Des Moines Public Library!
5. My dad used to make candies during the Christmas holiday and because I don’t get to be home much during the holidays, I started making my own candies. My favorite things to make are cookies, candied nuts, and fudge.
6. I am notorious for eating weird food combos. My favorite combo is mac and cheese, hot dogs, and peaches all cut up into one bowl.
7. I love music as most people do, but my taste in music genre is likely larger than most. Alternative Rock, Electronic Dance Music, 2000s pop, Christian Contemporary, and Country are just my favorite styles of music. If you drive past me in the car, chances are I’m dancing, singing, or both!
8. I am very athletic as I grew up a volleyball player and a dancer. I also took up tennis in high school and it became one of my favorite sports. I don’t play as often as I would like, but when I do I am still as competitive as I was back in high school.
9. I developed an interest in weather when I was 11 years old as a 6th grader. Teaching kids about weather as an adult has become one of the most rewarding parts of my job.
10. Many people ask me where I get my dresses. I’d say 75% of them are from the Amazon-based brand called Homeyee. I seek out good deals, so over 90% of them are under $20.
11. The only other career I wanted to pursue besides meteorology is oceanography. Specifically, I wanted to study sharks. I have always found sharks fascinating, mostly because they’ve inhabited the earth for millions of years! My favorite shark is the great white, but the great hammerhead is a very close second.
12. When I was in college I worked at a CVS. When I was there I learned the art of couponing which has led me to saving tons of money on everyday products.
13. My favorite bible verse is Jeremiah 29:11.

Meteorologist Amber Alexander joined the Channel 13 First Alert Storm Team in December 2015. Before WHO, Amber worked at KNOP in North Platte, Nebraska where she was as a meteorologist and reporter.
Amber earned a Bachelor’s Degree in Meteorology/Climatology at the University of Nebraska-Lincoln and is a proud Husker. While at Nebraska she served as the secretary of the American Meteorological Society, Activities Director for the Nebraska Storm Chase Team and worked as an intern at the state climate office for two years. Amber first got her on-air experience by broadcasting for UNL’s student run newscast, Star City News. She was also an intern for KETV in Omaha, NE.
Amber has always loved storms, but discovered her new passion for meteorology while simply studying the material in the sixth grade. It was then that she decided she wanted to be a meteorologist.
Since she grew up in Council Bluffs, Iowa, Amber is very happy to be back in Iowa and closer to her family. Although she is not a fan of the cold winters, Amber is excited to be in an area that has all types of weather conditions. However, she is most fascinated by severe weather. During her time at Nebraska she loved to storm chase. She even caught her first tornado in Solomon, KS on her first ever storm chase trip with fellow students in April 2012.
Amber is looking forward to growing in her forecast abilities and providing the best weather report she can for Central Iowa.