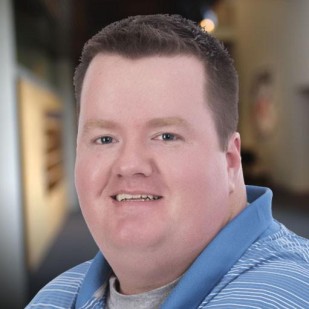 Aaron Hepker, the Director of Digital Content, joined the WHO-HD team in April 2014. Aaron works with our team of multimedia producers and journalists to make sure content on our digital platforms and social media channels is up-to-date.

Aaron was born and raised in Cedar Rapids, Iowa.

In the third grade, after several years of flirting with the idea of running for President, Aaron decided he wanted to pursue a career in the media. As a 12-year-old, he delivered his first weathercast on a local radio station (conveniently, it was owned by a relative).

At 16, Aaron landed his first real job in media as a weather intern at KCRG-TV in Cedar Rapids. That turned into a part-time position as a studio camera operator during evening newscasts. Shortly before starting his freshman year at Iowa State University, Aaron was given the opportunity to maintain the station website, kcrg.com, and decided that his passion was digital journalism.

In his 13-years at KCRG, he experienced 9/11, the start of the second Iraq War, the historic floods of 2008 that devastated many Eastern Iowa communities, elections, numerous tornadoes and blizzards. He served as executive producer for KCRG’s EMMY award-nominated, on-air and online coverage of the 2012 Iowa Caucuses. He also oversaw the station’s Election Night coverage in 2012.

In his free time, Aaron enjoys exploring Des Moines with his friends.