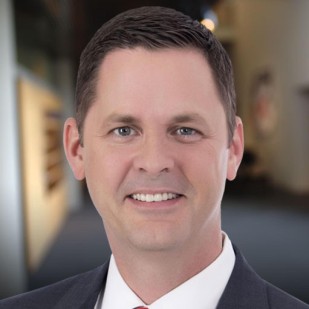 13 fascinating facts about Andy Fales:
• I am an avid gardener. I grow about 6 different types of heirloom tomatoes and many other vegetables and enjoy spending time working on my lawn and perennial gardens.
• I love to cook. My favorite time with my wife is spent in the kitchen making dinner and experimenting with new recipes.
• I am a dedicated supporter of the Animal Rescue League of Iowa and have loved dogs and everything about them since I was a little boy.
• I have played the electric bass guitar since I was in high school.
• My degree is in English, but when I first went to college, I wanted to be a wildlife biologist so that I could do a show like “Mutual of Omaha’s Wild Kingdom” which I loved watching as a child. I still hope to do something like that, some day.
• My very favorite sport to watch is St. Louis Blues hockey.
• The gold ring I wear on my right hand belonged to my great-grandfather and bears his initials, “IDF”.
• My mother’s family is from northern Wisconsin, and my parents retired there a few years ago. I take a summer vacation up there every year.
• My wife and I love to eat ethnic food. We love Indian, Thai and Japanese most.
• My favorite athlete of all time is Wayne Gretzky. I have met him or interviewed him eleven times.
• My wife, Kahala, and I took forever to agree on the names for our children, Elin and Eddie.
• I still love eating canned ravioli, drinking Kool-Aid, and watching “Little House on the Prairie.” Some things you just never grow out of.
• I love to camp, hike and fish. My best friend and I take a long trip to the Boundary Waters Canoe Area Wilderness in northern Minnesota every summer.
________________________________________

Andy Fales is an Emmy-award-winning reporter who co-anchors “Today In Iowa” each morning with Brooke Bouma. Since making the switch from sports in 2008, he has become one of Iowa’s most decorated storytellers and his “Iowa Icons” and “Andy Answers” reports have won numerous awards. He also contributes his well-known “What’s Bugging Andy?” commentary to Channel 13’s long-running call-in show “SoundOFF.”

Andy and his wife, Kahala, are the proud parents of two beautiful (usually beautiful) children and two dogs. Andy was born and raised in St. Louis and is still an avid fan of the St. Louis Cardinals and St. Louis Blues.

You can reach Andy at andy.fales@whotv.com.