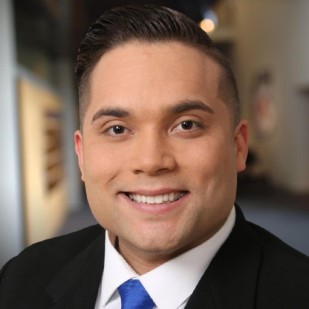 1. I worked in Shenzhen, China for a year teaching English to primary school students.
2. I can speak “survival” Mandarin Chinese.
3. I’ve walked on the Great Wall of China.
4. I spent the day riding a bike around Angkor Watt in Cambodia (think Tomb Raider with Angelina Jolie).
5. I have also ridden an elephant.
6. I’ve played with baby tigers.
7. I have backpacked through most of Southeast Asia.
8. I can’t whistle.
9. I’ve never missed a flight.
10. I went skydiving on my 21st birthday.
11. I ate a scorpion in Thailand, it tasted like bacon.
12. I’ve seen both Elton John and Stevie Wonder in concert.
13. I’ve watched a world series baseball game at AT&T Park in San Francisco.

Before calling Central Iowa home Jerad was a one-man-band reporter for the NBC affiliate in Missoula, Montana. He wore multiple hats in Montana — reporting, weather anchoring and producing.

Prior to that, Jerad was a technical recruiter in the heart of Silicon Valley. He was born and raised in Northern California and received his Bachelor of Arts in Broadcast Journalism. He graduated from San Francisco State University in the fall of 2012.

While attending SFSU, Jerad reported, anchored and produced the university’s broadcast, “State of Events.” He also interned at ABC 7 News and KTVU Fox 2 News in the SF Bay Area.

In his free time Jerad likes to go on hikes, cook and travel to new places.

If you have any story ideas or must-see places in Iowa, send them his way.