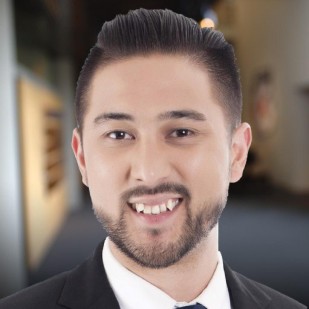 I am the oldest of 6 kids and I grew up in St. Paul, MN.
I have a Beagle named Buddy. Don’t try to pet him he bites. Just kidding, he’d have to interrupt his nap to do that.
I got into journalism by chance. I was going into a meeting with the mass communications advisor (Mark Mills) at St. Cloud State University. The first time I met with him he said, “I’ve heard about you and I think you’d be great for the Broadcast Journalism program.” I trusted him, signed up for the classes and instantly fell in love with it. Come to find out much later that he uses that line on everyone. Either way, thanks Mark Mills!
My mom wouldn’t want me to tell this story, but that’s ok. When I was nine, she let me skip school to see Space Jam on opening day. This is, without a doubt, one of the coolest things she has ever done for me. Thanks, Mom.
While in high school, I worked at an athletic shoe store. Needless to say, I have a pretty epic shoe collection. Included amongst the 70+ pairs, I have limited edition Jordans, Lebrons and Nikes. However, mycollection ‘crown jewel’ is my pair of Jordan Cool Grey 11’s. I’ll only wear them when the weather report is perfect!
The best piece of advice concerning journalism I’ve ever received was from Ed White, Assignment Manager at King 5 in Seattle. He told me, “In this industry, it doesn’t cost anything to be nice and it always comes around to pay you back!”
Recently, I completed a life goal and proved to my grandpa, that I am a man. (No easy task, considering Minnesota grandpas are from tough stock!) I accomplished this by going to an outdoor football game at TCF Bank Stadium, (where the VIkings and University of Minnesota teams play) when it was snowing out with a windchill of -10. The Gophers lost to Ohio State …. but I won.
I love to fish. I am terrible at it, but I find it very relaxing. It’s one of the few times I get to slow down and enjoy the outdoors.
My job as a journalist is to ask questions. I’m constantly asking questions. If you have one that you want me to find the answer to, email me.
Whenever I go to a restaurant, I always give my name as Julio. I love watching my friends faces when I do it; they always think I am super weird, or stealing a reservation. Good ol’ Julio, (he’s kind of my alter-ego!)
My favorite part about my job at WHO- HD is getting to meet new people, everyday. I love hearing people’s stories.
If the Minnesota Vikings ever make it to the Superbowl, I will be there. I will mortage off my house if I have to. If I’m being honest with myself, that will probably never happen. But I can dream!
I always end any interview with the same question: “Is there anything I should have asked that I didn’t?”
Josh Nguyen is currently the reporter for Today in Iowa. He joined the WHO-HD team in December of 2014.
Before he was in Des Moines, Josh spent time interning in Seattle, Washington at KING 5. There he learned under former WHO-HD News Director Mark Ginther.
Josh graduated from St. Cloud State University in Minnesota in December ‘14. He was the News Director at the university’s t.v. station (UTVS) during his time in college.