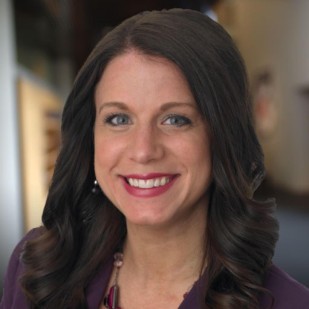 • 90’s music is my favorite and I have no shame attempting to sing all the lyrics even if I get them wrong.
• I was a Girl Scout for many years and still proudly support them by buying a lot of cookies every year.
• My favorite story was when I went to Washington D.C. to cover a group of veterans on the Honor Flight, to this day I still have a soft spot for World War II Vets.
• I am obsessed with peanut butter, and can often be seen eating it directly out of the jar.
• I worked at the Hy-Vee floral shop for 8 years and helped design my own wedding flowers.
• My husband Ryan is such a HUGE Nebraska Cornhusker fan, we held our wedding on the team’s bye-week so he wouldn’t miss a game!
• Throughout college I worked at NPR and loved it! When I retire from TV I want to go back!
• I love to cook and swap new recipes with my Dad.
• My great grandparents migrated to Iowa from Italy and started Graziano Bros Grocery, I love their pepperoni and homemade sausage!
• My first car was a 2000 Dodge Neon that I drove for 10 years until it literally fell apart and I had to say goodbye.
• I started watching Young & The Restless with my Mom in high school and now rarely miss an episode.
• Although my sister, Ashley is 4 years younger she is 6 inches taller and I often get mistaken for the younger sibling
• I started getting gray hair in my teens, thank goodness for hair color!!!

Before coming to WHO, Stephanie worked four years as a reporter for KLKN in Lincoln, Nebraska.
During her time at KLKN, Stephanie reported, anchored and produced. While there she also won a “Gold Award” from the Nebraska Broadcasters Association for her story on a military dad and his children.

Stephanie graduated in 2007 with a Broadcasting and Communications degree from Northwest Missouri State University in Maryville, Missouri-GO BEARCATS!

Stephanie’s excited to be back in Des Moines, reporting the news in her hometown. She was raised in West Des Moines and most of her friends and family still live in the area.

“It’s such a great feeling to know I’m able to do what I love in the town I grew up in,” says Stephanie.

When not at work, you can find Stephanie taking care of her new son Sawyer and cheering on the Huskers with her husband, Ryan. She’s also part of the Italian American Women of Iowa and Ankeny Jaycees.