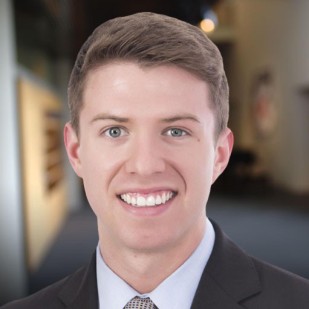 1. My first name is actually William. Reid is my middle name, but my parents have called me by it from day one.

2. I was born and raised for the first decade of my life in Tupelo, Mississippi. Most of my extended family still resides around that area to this day; we were the first Chandlers to venture to “Yankee country,” as my cousins would call it.

3. I had a heavy Southern accent until sometime between the 6th and 7th grades; Iowa middle schoolers are cruel, and I got tired of people pointing out the fact the words “pen” and “pin,” as well as “well” and “whale,” sounded exactly the same in my vernacular. I observed how the Midwestern spoke, and attempted to mimic it until it became my default accent.

4. I decided to run for Student Council my senior year of high school, but instead of giving a normal speech, I rapped mine while a friend beat-boxed. I got elected.

5. I was the “Announcements Guy” in high school, but broadcast journalism never entered my mind as a potential career. My parents suggested it one day, and I went for it.

7. I worked at my student paper and broadcast, The Daily Iowan and Daily Iowan TV, all four years of undergrad while at the University of Iowa. My very first story assignment had me interviewing Aasif Mandvi from The Daily Show while he was in town for our school’s Welcome Week. That was the moment I realized journalism could take you anywhere, and I was hooked.

8. I ran the Chicago Marathon in 2011 with one of my best friends, but due to a lack of serious training, Oprah Winfrey’s race-time was faster than ours. Nothing against Oprah…but now I feel a burning desire to redeem myself and run another.

9. I spent the summer of 2012 in an academic program at Georgetown University called the Institute on Political Journalism. D.C. became my favorite city after that – but the cat-sized rats at Georgetown are unforgivable.

10. Probably my greatest fear are heights; if you convince me to climb up something, there’s a really good chance you won’t be able to get me down. But while studying abroad in Australia my junior year, I decided to conquer my fear and go sky-diving over the Great Barrier Reef. It was equally the most terrifying and gratifying experience of my life.

11. I’ve never been to Disney World. I blame my parents, and feel deprived of a childhood.

12. I developed a passion for political journalism after covering the Iowa caucuses in 2012 for a journalism class. I would love to cover a presidential candidate on the campaign trail one day.

13. I can talk Star Wars, Lord of the Rings, Game of Thrones, and all things Marvel for days.

Reid Chandler joined Channel 13 as a Multimedia Journalist in July 2014, after graduating from the University of Iowa with degrees in journalism and political science in May. Born in Tupelo, Mississippi, Reid’s family are true Southerners, but he considers Iowa home after moving to the state at the age of 12. He’s excited to start his career as a journalist in the heart of Iowa.

Reid spent his four years of undergrad working for his student paper and broadcast, The Daily Iowan and Daily Iowan TV. He served as News Director for the TV branch his senior year. Reid also had internship experiences at WTAX NewsRadio in Springfield, Illinois, the Political Unit at NBC Washington, CBS News in New York, and two semesters reporting for KCRG-TV9 News in Cedar Rapids, Iowa.

Reid is passionate about political journalism, discovering the interest in 2012 while covering candidates during the Iowa caucuses for a journalism course. He loves the political atmosphere in Iowa, as well as the amount of engagement the process receives from the people. He’s excited to catch some of that excitement here in Des Moines as he covers stories for Channel 13. Telling people’s stories and covering issues that matter to the community are what get Reid out of bed every morning – you can send him any ideas or suggestions you have at reid.chandler@whotv.com, or find him where he’s most comfortable: on Twitter @thereidfeed.