MAHASKA COUNTY, Iowa -- Authorities made three arrests in connection to the death of a woman found in the South Skunk River.

The arrests are part of the investigation into the death of 24-year-old Ashley Shafer, who was found dead in the South Skunk River in Mahaska County on August 6. 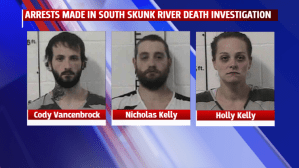 Shafer was at the Kelly's apartment in Oskaloosa with the three suspects on August 5, according to the Iowa Department of Public Safety. During the evening, Vancenbrock allegedly injected Shafer with methamphetamine, which caused her to overdose and die. Authorities said Vancenbrock and Nicholas Kelly then drove to rural Mahaska County, where they weighted down Shafer's body and put her in the South Skunk River in an attempt to conceal her death. Law enforcement found Shafer's body the next day.

Vancenbrock is charged with one count each of involuntary manslaughter, delivery of a controlled substance, abuse of a corpse and sponsoring a drug house.

Nicholas Kelly is charged with one count each of abuse of a corpse and sponsoring a drug house.

Holly Kelly is charged with one count of aiding and abetting in abuse of a corpse.

All three suspects are being held in Mahaska County Jail.