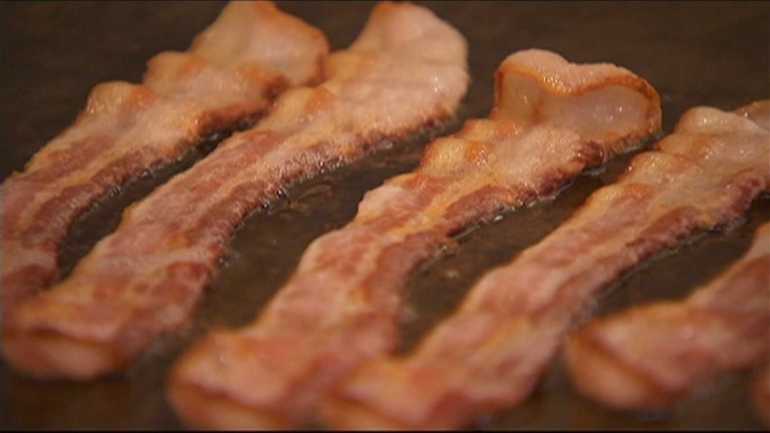 No, a study didn’t find bacon to be healthy. But America’s favorite smoked meat is more affordable today.

A one-pound package of bacon is 25% cheaper now than a year ago, according to U.S. Agriculture Department data. That’s over a dollar and a quarter in savings and puts bacon back on par with breakfast sausage prices.

In the past year, Americans ate 1.1 billion — billion with a B — servings of bacon at restaurants.

Eateries are happy to indulge people’s bacon cravings, especially now that prices are falling. At casual dining restaurants, bacon sales are up 13% on the year, according to market research firm NPD Group and CREST food service.

Adam Daily is saving much-needed money on bacon. He and his wife Eva run Bacon Bistro & Cafe in Hurst, Texas., a local favorite just outside Fort Worth. Daily says he is now saving $125 to $150 a week because bacon is cheaper.

“I certainly have noticed the prices come down a bit,” says Daily, 41. “I definitely think customers are ordering more bacon.”

Daily isn’t lowering his bacon prices yet because the savings help offset an egg price jump. A bird flu virus is killing millions of chickens, raising egg prices. For breakfast locales, any bacon savings are needed to weather the egg price hike.

It’s a reminder of how tough it is to manage menu costs. Bacon went through its own crisis a year ago. A swine flu virus last summer cut down the bacon supply, sending bacon prices soaring by 14% on the year last May. This year’s plunge is the first time in two years that bacon prices have fallen.

The more affordable bacon prices this summer have a bit to do with sex. Pigs can give birth to several piglets at a time, quickly refilling America’s pork supply. Other animals, like cows, can only reproduce one calf at a time, taking longer time for supply to match demand.

The science plays directly into the prices on grocery store shelves. Beef prices are 13% higher now from a year ago, the twelfth consecutive month of double-digit price increases, according to the Labor Department. Cattle farmers are still trying to repopulate their herds after a multi-year drought in Texas.

Despite the price hikes and drops on different meats, some stores continue to see customers demanding, “Where’s the beef — and bacon?”

Singleton’s General Store is a hit in Proctersville, Vermont. Established in 1946, the store has a sign outside that reads “Cob Smoked Bacon, Guns and Ammo, Maple Syrup.”

Assistant manager Jessica Gould says the store sells 4,000 pounds of bacon during Vermont’s ski season. Most days are a “non-stop battle” of loading and unloading the smoker.

“I have seen an increase in the sales of bacon, most definitely,” says Gould, 28. “Bacon is always a demand at Singletons.”

Customers often tell her, “We came just to get your bacon.”