Des Moines - Former Iowa All-American Chuck Long has a new book out, authored by Aaron Putze. It's titled Destined for Greatness – The Story of Chuck Long and Resurgence of Iowa Hawkeyes Football.

Monday at G-Migs in Valley Junction, Hawkeye fans of all ages lined up to buy a copy of the book and have Long himself sign it.

Channel 13's John Sears also asked Long for his thoughts on Iowa sophomore quarterback Nate Stanley. Long and Stanley are the only two Hawkeye QBs to throw for five or more touchdowns in a game twice.

Long had high praise for Stanley, and his potential to be even better.

You can play the video, and find more details on the book below. 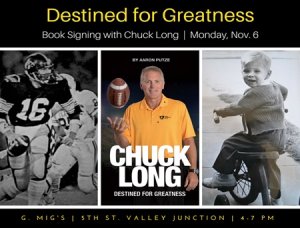 Sound too good to be true? Not if you’re “destined for greatness,” a bold proclamation made by Coach Hayden Fry before his recruit took a snap as a starter and the title of a just-released book chronicling Long’s inspiring story.

Authored by Aaron Putze, Destined for Greatness takes readers on a one-of-a-kind journey no one anticipated Chuck would one day travel as an energetic youth growing up in Wheaton, Illinois (including his family and closest friends!). From starring on the neighborhood playground affectionally called “The Tot Lot” to his current role as Executive Director of the Iowa Sports Foundation, the fast-paced narrative recounts the highs and lows of an Iowa football program learning to win again while Iowans endured the pain of the 1980s farm crisis.

It also retraces the path taken from starring in Kinnick to the challenges of competing in the NFL, including his first start under the lights on a Monday night versus the defending Super Bowl Champion Chicago Bears.

“Everyone loved Chuck Long,” recalls Hayden Fry in an exclusive interview for the book. “He proved that during his playing and coaching careers and as a student at the University of Iowa. Chuck did all the right things, and he’s still doing them today as an announcer for the Big Ten Network and in his work with the Iowa Sports Foundation.

“I just can’t put into words how much I love Chuck Long and what he did not only for Iowa but for every team he’s been associated with,” Hayden adds. “He’s a real winner.”

Chuck Offenburger, an award-winning writer and sports enthusiast, says the book recalls a special time in the history of the Iowa football program. Chuck Long’s arrival in Iowa City, he says, occurred during a brutal farm crisis and toward the waning of the University of Iowa’s “football crisis” that had been raging for 19 years.

“Young Chuck, colorful Coach Fry and the rest of the Iowa Hawkeyes gave us victories, bowl games, No. 1 national rankings and most important of all, hope, right when the whole state needed it,” Offenburger says. “We’re way overdue in telling and celebrating that story. Thanks to Aaron Putze for doing it, and doing it so well.”

The book is available for $17.95 (soft cover) via Amazon.com, at Kindle Direct Publishing and select book stores and retailers. A hard cover version will be available in mid-November; n audio version is scheduled for release in December.

For more information about the book’s availability, dates, times and locations of signings and other special promotions including signed Chuck Long memorabilia, go to www.facebook.com/greatness16.

Aaron Putze combines his respect for farmers with faith and a love of family and country as Director of Communications & External Relations for the Iowa Soybean Association. He was raised on a crop and livestock farm near West Bend, Iowa and earned degrees in public relations, communications and journalism from the University of Northern Iowa. He’s an accredited public relations practitioner and enjoys sports, barbecue, yardwork and spending times outdoors. He resides in Waukee, Iowa, with his wife Crystal and children Garrett, Grant and Jaelyn.

CHARLESTON, S.C. (AP) — Democratic rivals to Bernie Sanders are preparing to try to knock him off his front-runner perch in a debate Tuesday night before a critical South Carolina primary that could dramatically reshape the race.

With mounting fear among the Democratic establishment that the self-described democratic socialist is on the verge of gaining a significant lead in the delegates needed to secure the nomination, several candidates are resorting to a last ditch effort to stop him. The day before Tuesday night’s debate in Charleston, they previewed their lines of attack in a series of digital or television advertisements.

Man Who Fell Through Lake Ice Rescued in Southeast Iowa