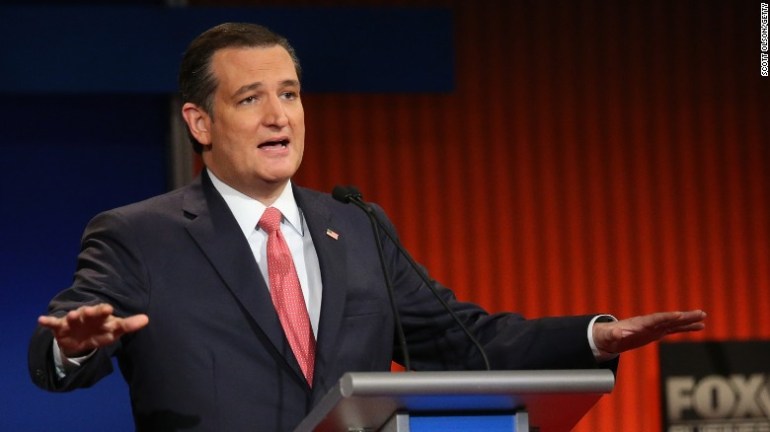 Ted Cruz has won the Kansas Republican caucuses and is ahead in Maine as the Texas senator seeks to use the Super Saturday contests to bolster his argument that he is the only viable alternative to Donald Trump.

Cruz’s robust performance comes on a day of primaries and caucuses in five states that front-runners Hillary Clinton and Donald Trump hope to use to solidify their delegate leads in the Democratic and Republican presidential races.

The GOP slate Saturday, with 155 delegates up for grabs, also includes a caucus in Kentucky and a primary in Louisiana, in which Trump is expected to do well. But it’s likely to be yet another tough night for Sen. Marco Rubio, who has claimed only one win so far in the race and is now facing a must win contest in Florida on March 15.

Cruz also got a morale boost from the Conservative Political Action Conference (CPAC) outside Washington, where he won a straw poll, further demonstrating his appeal to the Republican Party’s conservative base.

“God bless Kansas. And God bless Maine,” Cruz said, and argued that his performance on Saturday represented an important pivot point in the GOP race.

“What we are seeing is Kansas is a manifestation of a real shift in momentum,” Cruz told reporters in Idaho where he had a campaign event. He again asked rival candidates to “prayerfully” consider whether they had a path to victory as he sought to unite opposition to Trump.

While Kansas may represent too small a sample to validate Cruz’s claims, it is clear that his win will be parsed for signs that it represents the stirrings of a backlash against Trump, after the billionaire became embroiled in a controversy he was slow to repudiate the Ku Klux Klan, and introduced a vulgar note into a Republican debate on Thursday night.

On the other hand, the victory by Cruz in Kansas appears to fit squarely into historical precedent. Like Cruz, the previous two victors of that state’s GOP contests, Rick Santorum in 2012 and Mike Huckabee in 2008, had strong appeal among evangelicals which they had also demonstrated by winning the Iowa caucuses.

Neither went on to win the nomination.

And while he is talking up his national prospects, the Texas senator has so far not shown much capacity to win expand his appeal beyond hard-core conservatives.

Super Saturday voting is happening in the wake of former Republican nominee Mitt Romney’s assault on Trump, which ignited a civil war within the GOP between establishment figures and the billionaire’s army of angry ‘outsider’ voters.

Democrats, meanwhile, are going to the polls in Kansas, Louisiana and Nebraska with 109 pledged delegates at stake.

Clinton is looking to further cement her lead over her challenger Bernie Sanders, though the Vermont senator will be encouraged by the fact that the contests in Kansas and Nebraska are caucuses, a format in which he has tended to perform better than primaries during the 2016 campaign.

The Super Saturday contests offer a chance for the two front-runners to quicken their momentum after they both came out of the contests last Tuesday with solid delegate leads. They still face major battles in crucial elections in Michigan, Ohio and Florida over the coming weeks.

“It looks like Louisiana will follow the trends with the previous results from Super Tuesday, whereby Clinton will win by a significant margin,” Lee said. “With the Republicans, it looks like Trump.”

Clinton has a lead of about 200 pledged delegates over Sanders, while Trump leads Cruz by around 100 delegates and is about 200 delegates ahead of the third place candidate Rubio.

Saturday’s clashes between Clinton and Sanders, and a Democratic caucus in Maine on Sunday, will set the stage for the CNN Democratic debate on Sunday night in Flint, Michigan. The state also holds Republican and Democratic primaries on Tuesday.

DAYTONA BEACH, Fla. (WFLA) – Ryan Newman remains in a Florida hospital on Tuesday following a horrific crash in the final lap of the Daytona 500.

According to a new statement released Tuesday afternoon, Newman is “awake and speaking with family and doctors” at Halifax Medical Center in Daytona Beach.

Kerik, who once served three years in federal prison for charges including tax fraud and lying to officials, was nominated as homeland security secretary by President George W. Bush but withdrew from consideration due to potential tax violations and a former household employee’s questionable immigration status.

The body was discovered on Wendover Road, a gravel street that runs parallel to Interstate 80 to the South on Tuesday afternoon. Officers from West Des Moines Police, Des Moines Police and the Iowa Division of Criminal Investgation remained on Tuesday evening.