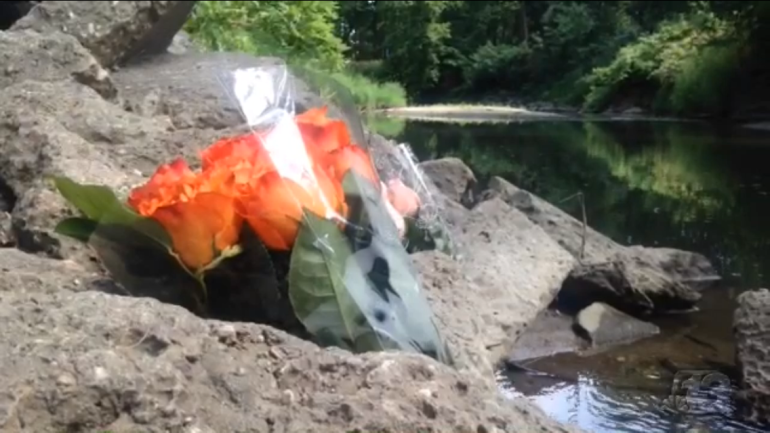 Flowers mark the spot where 35 year-old Adam Pritchard of the United Kingdom lost his life on Clive’s Greenbelt Trail.

Police believe Pritchard, visiting family in the Des Moines area, lost control before falling about eight feet to the rocks below where he died.  Fellow cyclists are upset the drop wasn’t guarded.

“It`s tragic. Any drop off like that that`s on a trail, I typically go 17, 18, 19 miles an hour on this trail, if it`s not protected if it`s not guarded it`s a problem” said Cyclist Jeff Merrill.

Merrill uses the trail system weekly and says they need to be marked better.

“There`s a trail, a Clive trail that goes under a bridge and immediately stops. There`s no indication that trail stops, there is no signage and those are the things that bother me as a cyclist” he said.

The Greenbelt trail is undergoing a revitalization plan that will lead to safety improvements, with this accident taken into account.

“If there are things that show up from that report we will certainly tend to those; and if any of that would extrapolate to other locations throughout the trail we would take a look at that too” said City Manager Dennis Henderson.

Up until now Henderson hasn’t ever heard of death on the trail, and cyclists say it’s relatively safe.

“You know I think if you pay attention to what you`re doing and look out for other people you`ll be just fine” said Don Utsinger, who rides the trail every day.

Cyclists say while there could be things the city could do to make the trail safer; they know that just like riding in a car, cycling has risks.

“Any amount of work that they would have done, guard rails that kind of thing, I`ve seen people have accidents regardless of all that. So I wouldn`t say it`s the city`s fault necessarily, it`s just some places like this need to
be marked, they should be guarded but that`s not going to cure everything” said Merrill.

The revitalization plan goes before the Clive City Council in August.