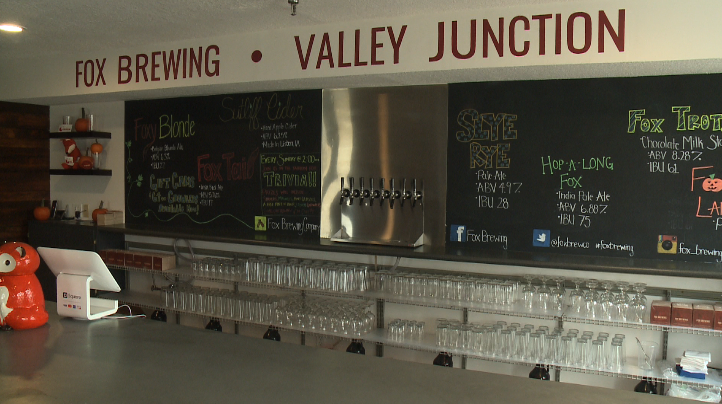 “Our tap room has been full since we opened,” said Brian Fox, founder and owner.

Fox got started years ago brewing beers in his parents’ basement. Then he says he decided the hobby was more fun when the beers actually tasted good, so he read several books, and listened to around a thousand hours in podcasts on the subject. After getting a few years’ experience at Court Avenue Brewing Company in Des Moines, Fox was ready to open up shop in Valley Junction.

“We stay open late on Sunday nights and air ‘The Walking Dead,’ which brings in people who order beer,” Fox said.

In a growing craft beer scene, Fox says opening up in the Des Moines area is helping increase its national notoriety.

“When people talk about great beer cities, they talk about Asheville, North Carolina, they think about Denver, they think about Portland, and that sort of thing,” he said. “But right now, Des Moines is one of the up and comers, and we’ve gotten a lot of recognition, because we do have some really great breweries around the Metro. And it’s not just that we have great breweries making great beer, we’ve got quite a few new ones that are popping up.”

(KTLA) - Acknowledging the integral role of medical workers and first responders in the fight against the novel coronavirus, Costco on Wednesday said it would begin giving them priority access to its stores.

Health care workers, police officers, firefighters, EMT's and other first responders will be moved to the front of any line to enter a Costco warehouse, the company said on its website.

The U.S. war against coronavirus took a devastating turn this week. But with more people taking social distancing seriously, new modeling predicts the coming months won't be as dire as initially feared.

DES MOINES, Iowa -- You've probably seen them over town, signs wishing people a happy birthday or just spreading positivity. Julie Groeteke is one of the masterminds behind the signs. She's the owner of Card My Yard Des Moines.

Her signs are becoming more important than ever during the COVID-19 pandemic.

Bernie Sanders Drops Out of the 2020 Race, Clearing Joe Biden’s Path to the Democratic Nomination

Bernie Sanders Drops Out of the 2020 Race, Clearing Joe Biden’s Path to the Democratic Nomination