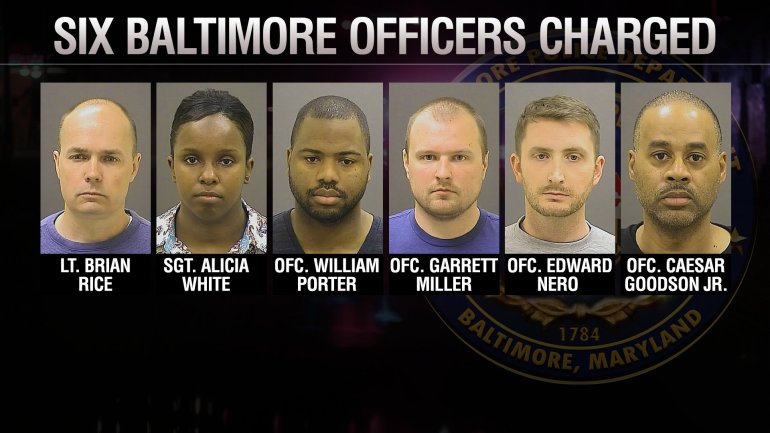 In publicly outlining her case against six police officers in the death of Freddie Gray, Baltimore’s chief prosecutor faulted what they did — and did not do.

Among the allegations: Failure to find probable cause, illegal arrest, failure to seek or render medical aid, gross negligence and misconduct.

“The findings of our comprehensive, thorough and independent investigation coupled with the medical examiner’s determination that Mr. Gray’s death was a homicide … has led us to believe that we have probable cause to file criminal charges,” State’s Attorney Marilyn Mosby told reporters Friday from the broad steps of the downtown War Memorial.

Gray suffered a fatal spinal injury on April 12 while being transported in a police van, which made several stops.

“Mr. Gray suffered a severe and critical neck injury as a result of being handcuffed, shackled by his feet, and unrestrained inside of the BPD wagon,” Mosby said.

Michael Davey, an attorney for the Baltimore Fraternal Order of Police who spoke on behalf of the six officers and their attorneys, told reporters that none of the officers injured or harmed Gray. “They are truly saddened by his death,” Davey said. “These officers did nothing wrong.”

These are the actions that Mosby said resulted in the charges against the six, based on the statement of probable cause:

Miller, 26, who joined the force in 2012, was one of three officers on bike patrol on the morning of April 12 in Baltimore. One of the other officers made eye contact with Gray, who began running.

Gray eventually surrendered and was handcuffed. He was “placed in a prone position with his arms handcuffed behind his back. It was at this time that Mr. Gray indicated that he could not breathe and requested an inhaler to no avail,” Mosby said.

Miller and another officer placed Gray in a seated position. They found a knife in his pants pocket. The blade of the knife was folded into the handle. It was not a switchblade, and legal to carry under Maryland law.

“Mr. Gray was placed back down on his stomach at which time Mr. Gray began to flail his legs and scream as Officer Miller placed Mr. Gray in a restraining technique known as a leg lace,” the prosecutor said.

The three officers failed to establish probable cause for Gray’s arrest. No crime had been committed. The arrest was illegal, Mosby said.

When the police van arrived, Miller and the two other officers loaded Gray into the wagon. At no point was Gray secured by a seat belt as is required. A while later, at Baker Street, Miller and the officers removed Gray from the wagon, placed handcuffs on his wrists and leg shackles on his ankles. They completed paperwork before loading Gray back into the wagon. He was placed on his stomach headfirst on the floor.

Miller is charged with two counts of second-degree assault, two counts of misconduct in office and one count of false imprisonment.

Rice, 41, an officer since 1997, was one of the officers on bike patrol during the initial encounter with Gray. He made eye contact with Gray, who then ran. Rice and others failed to establish probable cause for Gray’s illegal arrest. Later, Rice and two other officers handcuffed Gray and put shackles on his ankles. The officers placed Gray back on the floor of the wagon, face down.

Separately, records from the Carroll County, Maryland, Sheriff’s Department show that Rice was taken to a hospital in 2012 because of concerns about his mental health.

The concerns were raised by another officer who is also the mother of Rice’s child, according to the records. At the time, deputies confiscated Rice’s guns and alerted his superiors in Baltimore.

The records show that Rice said he “could not continue to go on like this” and threatened to do something in his laundry room if the mother of his child “did not come over to his residence.” His specific threat was redacted from the documents. It’s unclear how long Rice was at the hospital.

Nero, 29, on the job since 2012, was the third officer on bike patrol when Gray was arrested. Mosby said Nero held Gray down until the wagon arrived. Along with Rice and Miller, Nero failed to establish probable cause for what Mosby called an illegal arrest. Nero also assisted Rice and Miller later in cuffing and shackling Gray.

Goodson, 45, who joined the police department in 1999, drove the transport wagon. He had been directed to deliver Gray to the central booking facility.

At one point, Goodson parked the van to check on his prisoner.

“Despite stopping for the purpose of checking on Mr. Gray’s condition, at no point did he seek nor did he render any medical assistance for Mr. Gray,” Mosby said.

Goodson returned to the driver’s seat and headed toward central booking with Gray still unsecured. After several blocks, the officer called dispatch to say he needed to check on his prisoner. He requested additional units.

Another officer arrived and, with Goodson, went to the back of the wagon. Gray requested help and said he could not breathe. One officer asked Gray if he needed a medic. Twice, Gray said he needed medical assistance. The officer helped lift Gray from the floor to a bench in the van.

Again, the officers failed to restrain Gray or request medical assistance. Goodson then responded to a separate call for assistance in an arrest.

“Despite Mr. Gray’s obvious and recognized need for medical assistance, Officer Goodson in a grossly negligent manner chose to respond … with Gray still unsecured by a seat belt in the wagon, without rendering or summoning medical assistance,” Mosby said.

At the next stop, Goodson was met by Miller and three other officers. He walked to the back of the wagon to check on Gray. Goodson and the other officers saw that Gray was unresponsive.

Still, Goodson picked up a new prisoner and drove to a police station to drop him off. He failed to restrain Gray for at least the fifth time, Mosby said. Gray was no longer breathing.

CNN legal analyst Sonny Hostin said the depraved-heart murder charge appeared to indicate the prosecutor believes Goodson was “one of the worst actors” in Gray’s death.

White, 30, an officer since 2010, was present during one of the stops to check on Gray’s condition. White and two other officers saw that Gray was unresponsive on the floor of the wagon.

White, who was responsible for investigating two citizen complaints related to Gray’s arrest, spoke to the back of the prisoner’s head.

When Gray did not respond, White allegedly did nothing. She had been advised that Gray needed a medic but made no effort to assess his condition.

“Despite Mr. Gray’s seriously deteriorating medical condition, no medical assistance was rendered or summoned for Mr. Gray at that time by any officer,” Mosby said.

Later, White and two other officers attempted to remove Gray from the wagon. He was no longer breathing. A medic later determined Gray was in “cardiac arrest and … critically and severely injured.”

Gray was rushed to the University of Maryland’s Shock Trauma Center, where he underwent surgery. On April 19, he was pronounced dead from his injuries.

“The manner of death, deemed a homicide by the Maryland State Medical Examiner, is believed to be the result of a fatal injury that occurred while Mr. Gray was unrestrained by a seat belt in the custody of the Baltimore Police Department wagon,” Mosby said.

White is charged with one count of involuntary manslaughter, second-degree assault and misconduct in office.

Porter, 25, who joined the force in 2012, responded when Goodson asked for additional units to check on Gray. The prisoner told Porter he could not breathe. Porter asked Gray if he needed a medic. Gray said “yes” twice. The officer helped lift Gray to a bench but did not assess his condition or call for medical assistance. Porter also was present later when Goodson picked up another prisoner, and White and others discovered that Gray was unresponsive.

Porter is charged with one count of involuntary manslaughter, second-degree assault and misconduct in office.

URBANDALE, Iowa -- Spring is the biggest season for Opportunity on Deck, a metro nonprofit providing free athletic opportunities to central Iowa children. That’s because soccer is their most popular sport, but instead of practices starting this past weekend like scheduled they found themselves, like most Iowans, at home due to the coronavirus.

“The weather seems to be cooperating but everything else in the world seems to be a little bit chaotic. So instead of being around hundreds of kids every day of the week at all of these different locations, getting out in the community and getting outside, we're doing some indoor digital soccer practices,” Executive Director Dylan DeClerck said.

The school's partner Des Moines Area 515 Maker’s Space asked the school to use its two 3D printers and create face shields for doctors and hospitals in the state.

GRIMES, Iowa – An Iowa teacher is homeschooling children in her neighborhood as schools remain closed.

Lisa Smith is an art teacher in the Indianola Community School District and decided to help neighbors out while the schools are closed.