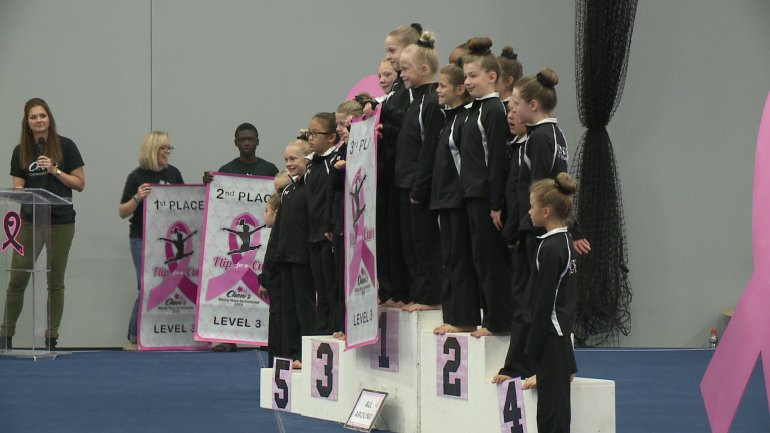 October first marks breast cancer awareness month, and Chow’s Gymnastics wasted no time in getting the donations flowing in.

Over 200 gymnasts descended on the Ohana Sports Complex in Grimes to compete.

“One in eight women will get breast cancer in their lifetime, so it’s really important that we try to raise awareness for them,” said meet coordinator Christine Svec.

The two-day event has raised over $1,300  for the Susan G. Koeman foundation, and they are still raising more.

Over 40,000 women are expected to die of breast cancer in 2016.  Chow’s Gymnastics says they want to get that number down to zero.

“We really are striving to have the girls choose healthy lifestyles, so in essence, hopefully preventing cancer,” said Svec,

The event strikes a chord for Brandi Jessen, a mother of a gymnast and who’s best friend Nicole was diagnosed with breast cancer immediately after giving birth.

“She was going to have a C-section so they said ‘we’ll just biopsy it during the C-section’ and she found out that day that it was cancer. So she had a baby on the same day that she found out she had breast cancer,” said Jessen.

Nicole was only 26 when she was diagnosed.

“It used to just be older generation of women and know it’s much younger, 20s, 30s we go to the breast cancer walk every year and you see younger and younger women with survivor shirts on,” said Jessen.

The gymnasts at Saturday’s event were young, but even at 9-year-old Greta Goodman had an understanding of why they were there.

“It’s pretty important cause you don’t know if they`re going to survive or not, so it’s kinda sad,” Goodman said.

“I think that it’s great that for this younger generation to have that awareness and hopefully in their lifetime we can find that cure,” said Jessen.

The event concludes on Sunday.

SoundOff celebrates 1200 episodes with a look back as some of our most popular videos, leaning heavily toward the ones that haven't been played as much, but still finding time for the nostalgic classics.

Thank you for all the support for nearly 25 years, virtually unheard of in local television.

PLEASANT HILL, Iowa -- More than 500 seniors from Southeast Polk High School were supposed to have their graduation ceremony at Drake University this weekend. But like many other schools, that couldn’t happen due to COVID-19. However, it didn't stop staff from celebrating their big achievement. “It was really important to us this year to do something today. Obviously, you can't have an in-person, face-to-face graduation ceremony. But we still…

LAKE OF THE OZARKS, Missouri -- Video posted by a reporter shows partiers crowded together in a pool at the Lake of the Ozarks, Missouri, this Memorial Day weekend. Scott Pasmore, an anchor for CNN affiliate KTVK, shot the video at Backwater Jacks Bar & Grill in Osage Beach on Saturday. https://twitter.com/scottpasmoretv/status/1264394565861232640?ref_src=twsrc%5Etfw%7Ctwcamp%5Etweetembed%7Ctwterm%5E1264394565861232640&ref_url=https%3A%2F%2Fwww.cnn.com%2F2020%2F05%2F24%2Fus%2Fozarks-missouri-party%2Findex.html The gathering violates social distancing measures intended to limit the spread of COVID-19. As part of Missouri's reopening…

Insiders 5/24/20: Get to Know the Republican Candidates for Iowa’s 3rd Congressional District

Des Moines Teen Shot in the Neck Saturday Has Died

Des Moines Teen Shot in the Neck Saturday Has Died