DES MOINES, Iowa —  Police have identified a man who died as a result of injuries sustained in a weekend fire, and Des Moines police are also looking for a man they hope can answer some questions in connection with the death.

The death of 26-year-old Christopher Lenhart is being considered a homicide – the city’s 23rd of 2017.

At approximately 1:27 p.m. on Friday, officials responded to 1439 Henderson Avenue on a report of a fire. When they arrived, they found two vehicles on fire and Lenhart suffering from burns on a large portion of his body.

He was transported to University of Iowa Hospitals for treatment, but died as a result of his injuries on Sunday. 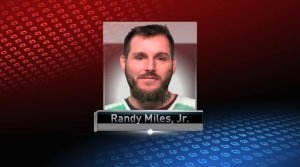 Detectives are now investigating the incident as a homicide, saying it has been determined the victim was set on fire intentionally.

Officials are looking for 41-year-old Randy Miles Jr. in connection with the case. Police say they believe Miles has information that is “critical to the resolution of the investigation.”

If you have any information on the case or know where Miles is, contact Crime Stoppers of Central Iowa at 515-224-1400.