BONDURANT, Iowa -- It was something Marshalltown High School and University of Iowa graduate, Maddison Wignall, had never done before, travel to Europe.

“I went to Croatia to meet my friends where we lived aboard this sailboat and kind of sailed around different islands,” 23-year-old Maddison Wignall said.

On the second to last day, she and her friends rented mopeds to go up a mountain for a beautiful ocean view, but Maddison never made it all the way to the top.

“I remember right before I watching just down the mountain over the water and I had my arms out and then I saw this curve coming up and I saw this car. I knew that it wasn’t going to be good, and we were going to get hit. Then I black out and then I wake up under the car,” Wignall said.

Her first reaction was to try and get up. “I could hear the idling engine sound and so I realized I was under the car and I thought ‘ok well this is it,’” Wignall said.

An ambulance ride down the mountain, and then a helicopter ride to the mainland got her to a hospital where she quickly realized this experience would be like no other.

“We got to the hospital and we got wheeled in and nobody spoke to me,” Wignall said. “I was just laying in the hallway for a really long time. I was kind of just staring at the ceiling because I was in a neck brace.”

Trying to keep herself awake, Maddison just replayed moments from her trip, avoiding the worst of thoughts.

“I didn’t know what city I was in or kind of anything that was going on, what test they were running, what my physical injuries looked like," Wignall said.

Finally a swarm of 10 or more doctors surrounded her in the emergency room. “They said like in this simple English like ‘have to put bones back in.’ Right before that they put a wet towel in my mouth for me to bite on, for the pain I guess,” Wignall said.

To her knowledge no pain medications were ever given.

“They just went simultaneously on both sides and set both shoulders and set both arms and then the doctor said I had to relax and stop screaming otherwise they couldn’t set this left arm that was the compound fracture. So I relaxed,” Wignall said.

Eventually she stopped crying and just accepted the pain. Three titanium implant procedures were done to fix a laundry list of broken bones and a punctured lung. But the recovery wasn’t easy in Croatia. 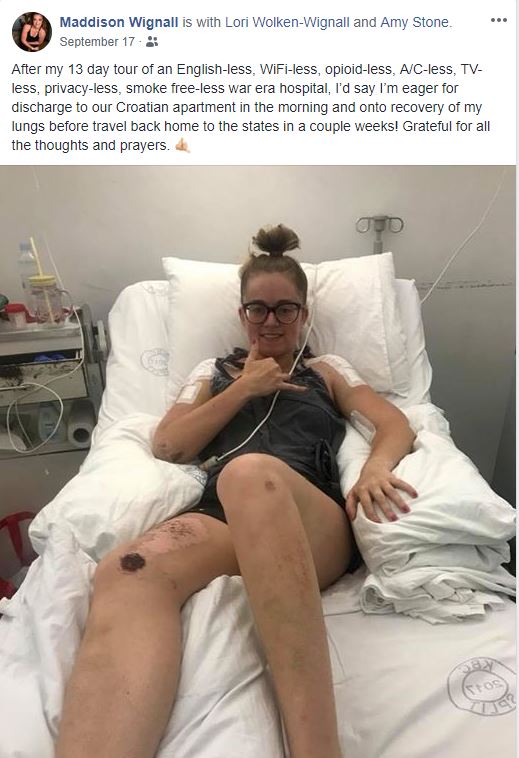 “I was in a big ward with a lot of other people. After I left the Intensive Care Unit (ICU) on day three, I wasn’t hooked up to any sort of monitors. You’re just in a bed and mine was broken. I think a lot of them were broken,” Wignall said. And if she needed a nurse for a glass of water or to use the restroom she’d just have to wait.

“I just had to scream for sometimes 40-45 minutes at a time through a steel door that closed our room off and hoped someone would walk through the hall and hear me,” Wignall said.

Luckily Maddison’s phone survived the crash and her friend immediately got a hold of her mom and step dad who got on the next available flight.

“During that time in the ICU, I wasn’t allowed to have a phone or make an international call. So I couldn’t give them any information. My parents didn’t know until they landed in Germany and were out of the air that I was even alive,” Wignall said.

Her father stayed back, working what she called a “war room” in his office, finding a doctor back in Des Moines and exhausting all efforts. That included getting the United States Embassy involved to try and help foster a relationship.

“Then we learned they don’t have electronic medical records. They write everything down on paper. They weren’t going to release any of my records to anyone in the states,” Wignall said.

So Maddison’s doctor back in Iowa started communicating through text across seas every single day, getting ready for her return to the states.

“I think to maximize, to give her the best possible outcome, a young healthy girl that she is, we had to change a thing or two just to make it a bit better in my opinion,” Dr. Chine Nwosa, Iowa Ortho orthopedic trauma surgeon, said.

After three extra weeks spent in Croatia, Maddison finally flew home to have yet another surgery to upgrade some of the titanium implants.

“Once we kind of pulled up to my house I experienced a panic attack. I was kind of coming out if survival mode,” Wignall said.

She’s now regaining over 22 lbs. of muscle mass loss from not being able to get out of her hospital bed in Croatia, and gaining more functionality in her arms every day. In fact, her doctor just cleared her to move back to her studio apartment in Chicago.

“It’s a huge milestone. I think I’m really proud of myself and of my family and I can’t believe it’s only been two months,” Wignall said. “When we got back to the states I could only move my hands and now I can move my arms a little bit or a lot I guess. So taking care of myself will be awesome, and i’m excited to kind of have my bed back and my little neighborhood back and different little things I like to do in Chicago.”

“But I will miss my family and it will be a struggle. I think at first but it’s the next best step.”

First her family is spending this Thanksgiving weekend being thankful for every moment with their loving and goofy girl.

Stocks sank around the globe again Friday as investors braced for more economic pain from the coronavirus outbreak, sending U.S. markets to their worst weekly finish since the 2008 financial crisis. The damage from the week of relentless selling was eye-popping: The Dow Jones Industrial Average fell 3,583 points, or 12.4%. Microsoft and Apple, the two most valuable companies in the S&P 500, lost a combined $300 billion. In a…

WASHINGTON, D.C. (AP) — Moving to stem a vaping epidemic among young people, the House approved a bill Friday to ban the sale of flavored e-cigarettes and other flavored tobacco products. The bill would place new restrictions on the marketing of e-cigarettes and ban flavors in tobacco products, including menthol cigarettes. It also would place a new excise tax on nicotine. The House approved the bill, 213-195, sending it to…

OAK PARK, Illinois (CNN) — An elderly couple is upset and shaken up after police swarmed their car in a parking lot after they left their normal bank.

Ottis Dugar, 86, and his 67-year-old wife Demitri still can’t believe they were mistaken for armed thieves.