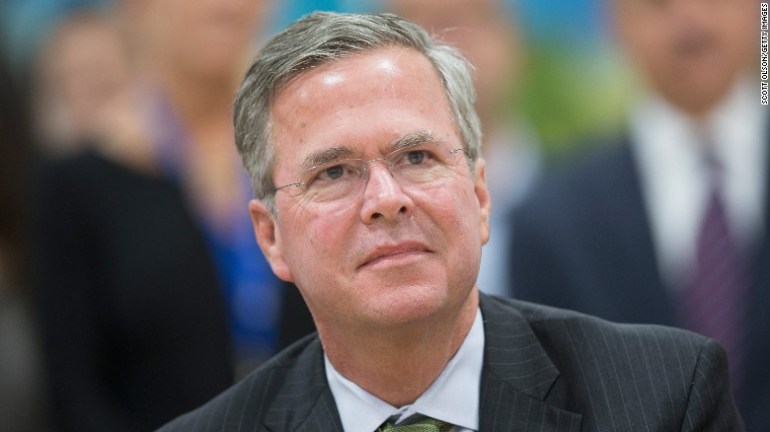 It’s one of two negative ads against Bush’s rivals released by the group on Tuesday, with the other hitting Govs. Chris Christie of New Jersey and John Kasich of Ohio.

Right to Rise USA is spending $1.4 million on a 30-second spot that will run in Iowa over the next two weeks, an apparent attempt to blunt any momentum Rubio could pick up in the upcoming Iowa caucuses on February 1.

The ad mentions that Rubio missed a briefing following the Paris terror attacks, and blasts him for being at a fundraising the same day as the San Bernardino attacks.

“Politics first. That’s the Rubio way,” the narrator states at the end.

After missing the briefing following the Paris attacks last month, Rubio’s team argued at the time that he attended a separate classified Intelligence Committee session.

“Bush’s team dishonestly omits that Marco is on the Senate’s Intelligence Committee, where he attended the highest level briefings on the Paris attacks,” spokesman Alex Conant said in response to the new ad.

“No other candidate for president has received more classified Intelligence briefings or better understands the threats facing our nation today than Marco. It’s sad to see Jeb’s ‘joyful’ campaign reduced to such intellectual dishonesty,” Conant added.

In a late October debate, Bush tried to confront Rubio on stage about missing votes, only to have the blow backfire on him.

“The only reason why you’re doing it now is because we’re running for the same position, and someone has convinced you that attacking me is going to help you,” Rubio fired back, receiving applause from the audience.

Meanwhile, Conservative Solutions, a not-for-profit group backing Rubio, released a one-minute web video highlighting nice things that Bush has said about Rubio, a former protege when the two were in Tallahassee.

The super PAC has previously hit Rubio, along with Ted Cruz and Donald Trump in an ad, but this is the first one focused solely on Rubio.

Later Tuesday, Right to Rise said it was going up with a new ad in New Hampshire that attempts to draw a contrast between two other candidates that are running in the establishment Republican lane: Christie and Kasich.

Along with Bush, the two men are banking on a win in New Hampshire to propel their candidacies.

While the ad doesn’t explicitly attack the two candidates, it tries to make Bush, the former governor of Florida, look more accomplished in comparison.

The ad mentions that Bush handled nine hurricanes, a veiled shot at Christie’s common citation of his widely lauded handling of Superstorm Sandy in 2012.

It also spotlights Bush as a governor “who led the fight against Obamacare expansion,” which is an indirect knock against Kasich, who accepted the Medicaid expansion in Ohio. Bush, of course, was not governor during the implementation of Obamacare, but in 2013 he worked behind the scenes to oppose the expansion.

Florida Gov. Rick Scott supported the expansion at the time, only to pull his support two years later.

Kasich spokesman Rob Nichols said in an email that the ad was “flattering.”

“They forgot to check the box for ‘Which governor is living in the past because he has no ideas for fixing it?’ You only attack who you fear and who’s beating you, so it only reaffirms (Kasich’s) strength in New Hampshire,” he said. “It’s actually flattering.”

A spokesperson for Christie did not immediately respond to a request for comment.