JOHNSTON, Iowa -- Johnston High School is under fire after a controversial banner was displayed at a basketball game against Des Moines North High School on December 6.

The Johnston student section is accused of holding a white bed sheet, or “curtain of intimidation,” with the word “RAT.” WHO-TV also confirmed that one of the students was also wearing a President Donald Trump mask.

Others are calling the event racially motivated since it is believed the taunting was in reference to comments made earlier this year by the president calling Baltimore rat infested, relating to North’s team, which is mostly made up of black students.

“It was an action that caused concern that was perhaps out of the norm for what we expect of our students,” said Laura Sprague, director of communications for the Johnston Community School District.

The student-run Twitter account Barstool JTOWN, which has since been deleted, defended the banner, claiming that “RAT” is actually a nickname for one of their own. The Twitter account is not affiliated with the school district, but it was known for its aggressive and confrontational tweets about administration and rival teams. 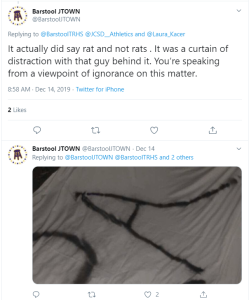 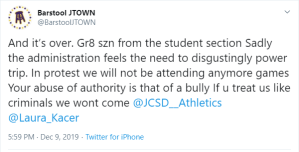 “I think anytime you see this type of incident that's not necessarily reflective of the student body or Johnston community as a whole, it does raise concerns. So that's why we're working very closely with administration at North, as well as students and parents involved, to work through this and learn from it as well,” said Sprague.

Sprague also confirmed the district is working on what consequences it will give students but says that matter is being done privately between administration and the students involved.

Des Moines Public Schools released a statement saying they are aware of the incident and that officials from Johnston reached out to North to apologize. The statement said moving forward this is an issue for Johnston to address with their students.

“When we have an issue that has upset people, we want to deal with it. We want to face the issue [and] work through it so that we can all learn and be better as a result of it,” said Sprague.

That’s the case for patients with Parkinson’s Disease, which is a type of movement disorder that affects the ability to perform common daily activities. It's chronic and progressive, meaning the symptoms become worse over time.

PLEASANT HILL, Iowa – Police in Des Moines are looking into whether a body found in Pleasant Hill Thursday is linked to any of its open missing person cases.

A spokesperson for the city of Pleasant Hill said the body that was found near the Highway 5 bypass and Vandalia Road is that of a white male.

How Coronavirus Can Impact Your Credit Score

Ankeny Photographer Gets Creative in the Name of Social Distancing