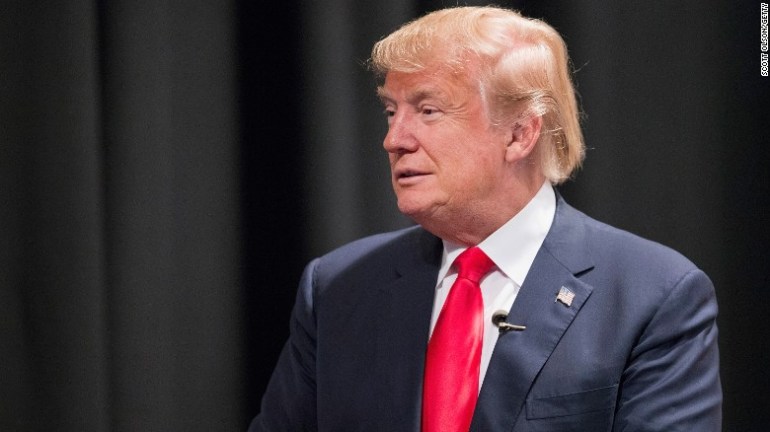 WASHINGTON, D.C. — Donald Trump is picking up where he left off in 2015 when it comes to his favorite Twitter targets.

Early in the morning, Trump called the former Florida governor a “sad case” with “no chance.”

“.@JebBush is a sad case. A total embarrassment to both himself and his family, he just announced he will continue to spend on Trump hit ads!” Trump tweeted.

He then hit the former secretary of state over her opposition to his call for a temporary ban on Muslims entering the United States.

“Hillary Clinton said that it is O.K. to ban Muslims from Israel by building a WALL, but not O.K. to do so in the U.S. We must be vigilant!”

Later in the day, the real estate mogul went on to compare her to Bush, using his favored “low energy” diss.

“Hillary Clinton doesn’t have the strength or stamina to be president. Jeb Bush is a low energy individual, but Hillary is not much better!”

Finally, he attacked Bill Clinton — who will soon appear on the campaign trail to support his wife’s presidential bid — by calling him a “hypocrite” on women’s issues.

“I hope Bill Clinton starts talking about women’s issues so that voters can see what a hypocrite he is and how Hillary abused those women!”

Trump had recently said that the former president’s alleged abuse of women and extramarital affairs were “fair game” for attacks.

DES MOINES, Iowa -- One couple didn’t let the coronavirus pandemic cancel their wedding plans. Greg Oman and Alice Lin got married at the Pappajohn Sculpture Park in Des Moines Monday afternoon, with a group of less than ten people in attendance.  The couple met two years ago when Oman was teaching English in Taiwan. After he came back to the United States, they kept their relationship going through Skype…

CLIVE, Iowa -- The coronavirus pandemic has parents getting creative when it comes to birthday parties. Monday is Hendrix's fourth birthday. Unfortunately, he couldn't have a party with all his friends. Instead, his whole community turned out for him. A parade of cars full of his friends, the Clive Fire Department and a state trooper all came driving by to wish Hendrix a happy birthday. "It was one of my…

DES MOINES, Iowa -- In one of America's most uncertain times, American Sign Language interpreter Tailyn Kaster is providing deaf and hard of hearing Iowans with clarity.

"I think it is amazing and definitely what the deaf and hard of hearing community want. They want to have that communication access in their native language," said Kaster.

Interactive Map: How many coronavirus tests have been conducted in Iowa?