Thirty-six-year-old Luke Swann has been identified as the man shot and killed by police. Officials say he and another man were suspects in another shooting from earlier in the morning that resulted in the theft of a vehicle.

Des Moines Police say they were investigating another shooting, which caused minor injuries, when the officer-involved shooting took place.

Police were called a little before 4:00 a.m. about a shooting at E. 25th and Logan Avenue. Thirty-four-year-old Brent Skelton told police his vehicle had been stolen by two men and one of the suspects shot him in the leg.  Skelton is being treated for minor injuries at a Des Moines hospital.

Around 4:01 a.m. police saw the stolen vehicle, with three people inside in the area of S. E. 14th Street and Pioneer Road. They followed it until the vehicle was parked in a driveway at 827 E. Kirkwood. The vehicle’s occupants got out of the vehicle and walked away. 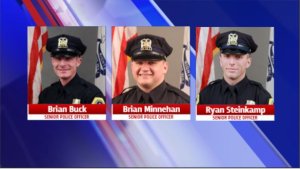 Officers took two of the occupants of the car, an adult male and adult female, into custody. Twenty-one-year-old William Weaver was one of the individuals in the car and is charged with Felon in Possession of a Firearm.

In a search for the second male, Swann, he was found hiding near the garage at the home. Officers ordered Swann to show his hands and that’s when police say he responded by firing multiple gunshots at the officers.

All three officers returned fire and Swann was hit multiple times. He died on scene.

Police say the incident was captured on body cameras the officers were wearing, but the footage is considered evidence in the investigation.

The Iowa Division of Criminal Investigation is assisting with the investigation.

Des Moines resident Hope Streeter lives with her three sons next door to where the shooting happened. Police told her the suspect went through her backyard before ending up in her neighbor's yard.

Streeter said she later found out multiple shots hit her home and one shot went into her bedroom where she and her son were sleeping.

"You know, to think that someone would pull out a gun on the officers first of all and then second of all shoot in a neighborhood that was obviously filled with kids. I have toys all over my backyard. You can tell there is children that live here and to just so blatantly fire to me it's just terrifying that they are just so caught up in themselves that they don't even think about the environment or the other people around," Streeter said.

Streeter said this is not normal for the neighborhood.

"So I've always had that good sense of security and safety with it and it's very violating to know that someone just came into our neighborhood and brought their drama here and they brought it around my kids. Thankfully it was during the middle of the night and not during the day when kids could have been outside," says Streeter.