DES MOINES, Iowa -- Des Moines police shared another video that appears to show a mountain lion in a residential neighborhood in Des Moines.

Police said the video was recorded near SW 16th Street and McKinley Avenue around 3 a.m. Friday. They warn the public to exercise caution in this area, supervise small children and monitor your pets.

Police said that if it is the same mountain lion spotted Wednesday and Thursday, then it appears to be moving southbound toward a less populated area of central Iowa.

Call 911 if you believe you see the animal. The police, the Animal Rescue League and the Iowa DNR have resources in place to respond to any sightings.

Police first received surveillance video showing a mountain lion outside a home in the area of 31st Street and Interstate 235 Wednesday night.

Someone then spotted the big cat again Thursday morning, just before 5 a.m. at the north end of Water Works Park. 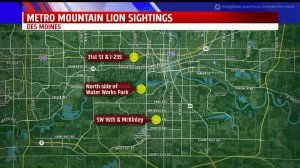 Vince Evelsizer, the furbearer biologist with the Iowa DNR, said the mountain lion likely made its way to Iowa from a western state. The DNR said it has no plans to eliminate the animal unless something changes and becomes dangerous.

“It’s not in town hunting people,” said Evelsizer, “We would like to give it a chance to leave town.”

There is not a breeding population of mountain lions in Iowa, according to the DNR. However, there are mountain lions spotted in our state every year. The DNR said there have been 1-2 confirmed sighting annually since 1995.

The DNR offers these tips if you encounter a mountain lion.

1.   DON’T RUN! Running will stimulate certain animals to chase you (like a dog that wants to bite you, especially if you run ).

2.   Stand tall, look big, puff up, and lift your coat over your shoulders.

4.   Gather children in close and slowly back away keeping your eye on the animal.

5.   If attacked, fight back vigorously with sharp objects and poke the eyes of the animal.