WASHINGTON, DC  —  President Trump called it a “a colossal victory for our farmers, ranchers, energy workers, factory workers and American workers in all 50 states” as he signed the USMCA trade deal.

“The USMCA is the largest, fairest, most balanced and modern trade agreement ever achieved. There’s never been anything like it,” Trump said. 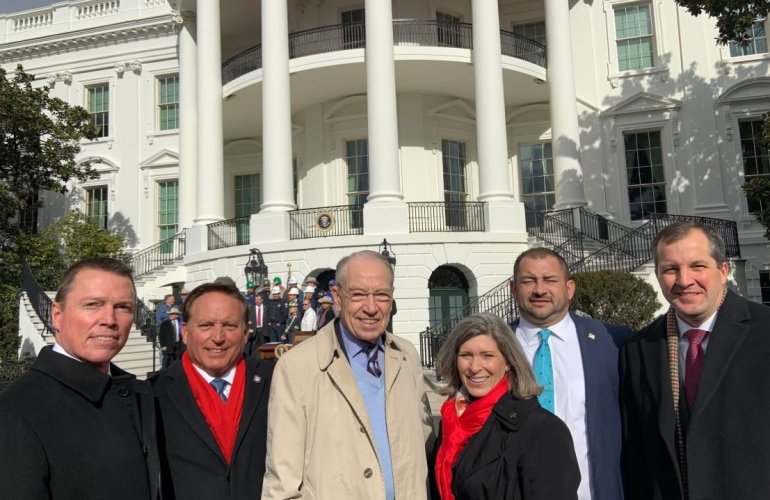 A group of Iowans including Senators Joni Ernst and Charles Grassley, Iowa Ag Secretary Mike Naig and Iowa Secretary of State Paul Pate were on hand for the signing.

“This updated agreement opens up new market access for made-in-America products. That means thousands of new jobs and a level playing field for U.S. farmers and manufacturers. It also creates strong protections and opportunities for American workers and innovators. The digital trade provisions in particular will guide the future of U.S. trade policy in the 21st century.”

“U.S. farmers are benefiting from the Trump administration’s efforts to renegotiate unbalanced trade agreements. Under the new USMCA, Iowa farmers will gain greater access to our two largest export markets, which is great news heading into the 2020 planting season.”

Governor Reynolds was not in Washington for the signing but sent her congratulations to the president this morning via press release:

“President Trump successfully negotiated a strong, balanced and reciprocal trade agreement that will benefit Iowa and the entire nation. Years from now, USMCA will prove to be a major boost to Iowa’s economy, especially for families, farmers, manufacturers and small businesses.  Mexico and Canada are Iowa’s top two trading partners, serving as a key market for our products. This agreement, along with phase 1 deals reached with China and Japan, will expand markets for Iowa producers.”

CNN has more details on the USMCA signing:

Trump gave shout outs to a long list of Republican senators — and current jurors in the impeachment trial — in the audience for Wednesday’s signing.

“Maybe I’m just being nice to them because I want their vote. I don’t want to leave anybody out,” Trump said before listing several GOP senators.

It was a day long anticipated by the trade-minded Trump, who earlier this month signed the first phase of a deal with China that aims to ease global trade tensions.

“This is something we really put our heart into. It’s probably the No. 1 reason that I decided to lead this crazy life that I’m leading right now as opposed to that beautiful, simple life of luxury that I lived before this happened,” Trump said during the ceremony.

The US-Mexico-Canada agreement replaces the North American Free Trade Agreement, which Trump railed against during the 2016 campaign. The new deal will undoubtedly feature heavily in his re-election pitch this year.

The plan enshrines new auto manufacturing requirements and tougher labor protections but largely leaves the trillions of dollars in trade flow between the three countries unchanged.

Democrats largely voted for the trade agreement alongside their Republican colleagues when it came to the floor for a vote in December. House Speaker Nancy Pelosi has said negotiations between Democrats and the Trump administration yielded a better deal — one she said little resembles the one Trump originally sent to Capitol Hill.

She was not invited to the signing ceremony, a spokesperson for her office told CNN. Nor was Ways and Means Committee Chair Richard Neal, a Massachusetts Democrat who shepherded the rebranded US-Mexico-Canada agreement to passage.

Mexico has ratified the agreement, but Canada must still sign off before it takes full effect.

DES MOINES, Iowa -- The suspect in a deadly crash that claimed the lives of two men last week on Des Moines’ south side has entered a plea of not guilty in the case.

Online court records show 23-year-old Alejandro Contreras, of Windsor Heights, entered a written plea of not guilty Tuesday on the two counts of vehicular homicide he is facing. A preliminary hearing in the case has been scheduled for March 2nd.

Ryan Newman shared a photo from a fishing trip he took recently while he recovers from his crash during the final lap of the Daytona 500.

"Got a little therapy in yesterday," Newman wrote in the post showing him holding a fish.

OSKALOOSA, Iowa (AP) — An Oskaloosa landlord and the father of a 7-year-old boy killed in a house fire have pleaded not guilty to child endangerment and other charges.