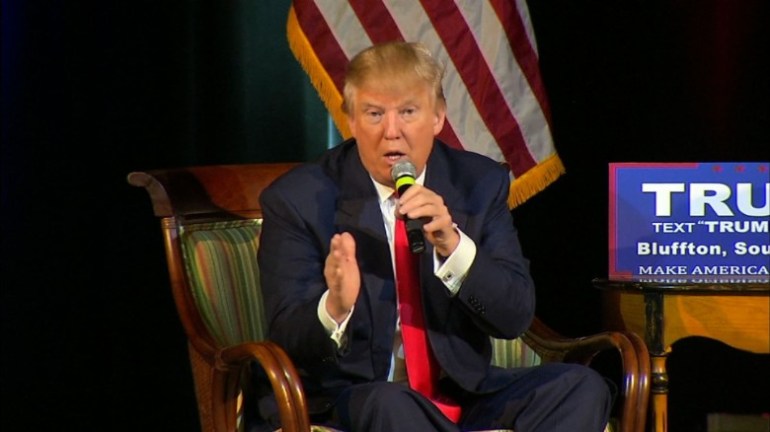 BENTONVILLE, Arkansas — Donald Trump on Saturday accused Florida Sen. Marco Rubio of stealing from the Florida Republican Party and suggested Rubio should have been “indicted” for using a state party American Express card for personal expenses.

“Rubio stole from the Republican Party,” Trump said of Rubio, with whom he has recently engaged in a public war of words.

Rubio used a corporate American Express card that the Florida state GOP entrusted to him during his time as a Florida state lawmaker for thousands of dollars in personal expenses, which he later reimbursed.

In November, Rubio released nearly two years of statements for the card, hoping to put to rest any lingering questions of impropriety.

Trump suggested on Saturday that Rubio only reimbursed the funds after he was caught.

And then Trump pointed to New Jersey Gov. Chris Christie, a former U.S. attorney, who endorsed Trump on Friday and joined him for Saturday’s rally at an airport hangar here.

Joe Pounder, a spokesman for Rubio, dismissed Trump’s allegations in a statement to CNN.

“Donald Trump is nothing but a con man who will say anything to defraud the American people like he did at Trump University, taking four businesses into bankruptcy or hiring foreign workers over Americans,” Pounder said. “The crowd at Trump’s event wasn’t applauding and the American people aren’t either.”

DES MOINES, Iowa -- Des Moines police are investigating after a man was shot multiple times Tuesday in the 1200 block of Euclid Ave.

DES MOINES, Iowa –The World Health Organization declared 2020 the Year of the Nurse and Midwife to celebrate the profession. A local health organization is marking its past, present, and future.

You can tell Curtis Johnson loves his job. “I love what I do because of surgery, in getting to watch people come in sick and leave healthy."

PLEASANT HILL, Iowa -- There's nothing more exciting for students than waking up, seeing snow on the ground and then turning on the news to find out you've got a snow day. As of late, school districts are making these days off from learning even more fun, releasing the good news in the form of a funny video. Many have gone viral, some from Iowa school districts have hundreds of…