Skip to content
Breaking News
Breaking News
Closings
This is an archived article and the information in the article may be outdated. Please look at the time stamp on the story to see when it was last updated. 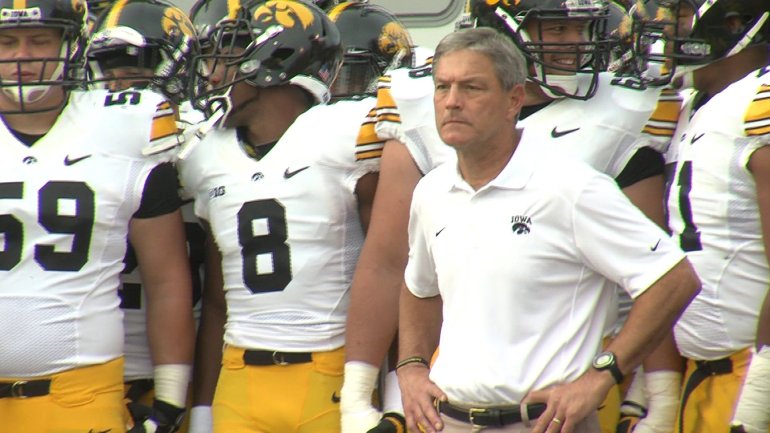 IOWA CITY, Iowa – Kirk Ferentz and the Iowa Hawkeyes will look to add another win to their 12-0 record all-time against FCS opponents when Illinois State travels to Kinnick Stadium on Saturday.

Ferentz enters his 17th season at the helm for the Hawkeyes, which is likely one of the most important campaigns in his career. Iowa has managed to go 19-19 in their last 38 games, and is coming off a disappointing loss to Tennessee by a score of 45-28 in last season’s TaxSlayer Bowl.

“I still don’t think we are over that one,” Iowa linebacker Josey Jewell said on media day. “I think that’ll still go throughout this year, just knowing how much better we can be and how much work we’ve put in over this offseason. We are ready to go this year.”

Saturday’s season opener against Illinois State appears to be the perfect opportunity for Iowa to put their TaxSlayer Bowl performance behind them and start the season strong.

However, Illinois State isn’t your typical FCS team. They made it to the FCS championship game last season before falling to North Dakota State 29-27, and head into this year ranked second in the FCS poll.

Illinois State quarterback Tre Roberson, who transferred from Indiana in 2014, is the player the Hawkeye defense will have to watch consistently on Saturday due to his playmaking ability. He’s a classic dual-threat quarterback who threw 30 touchdowns and ran for over 1,000 yards last year.

Roberson’s counterpart, Iowa’s C.J. Beathard, will be making his second career start for the Hawkeyes. The redshirt junior, who spent the last two seasons backing up Jake Rudock (now starting for Michigan), completed 17 of 37 passes for 245 yards and a touchdown in a 24-10 win against Purdue last year in his first career start.

“He’s just kind of taken off and really done a great job and accepted, not only accepted, but embraced being a leader,” Ferentz said of Beathard. “That’s part of being a quarterback, you have to be a leader so I think he’s excited about that.”

In the team’s last three season openers, the Hawkeyes have gone 2-1, with all of them ending as one-possession games. It will be key for Iowa to come out ready to play in this game perhaps more so than others, as Illinois State likes to start fast right out of the gate. The Redbirds outscored their opponents last season in the first quarter by a total score of 133-37.

NFL teams are having to rely more heavily on game film of college prospects as they prepare for the draft at a time when the COVID-19 pandemic has halted business as usual across the globe.

In this week's Murphy's Law, Iowa Madness: The Best Moments in Iowa Sports History. It won't be the same as actual games, but it should get many of us through April.

Murph Watches Too Much Tiger King

The Netflix phenomenon Tiger King is hard to believe, and hard to stop watching. Maybe Keith Murphy should have.