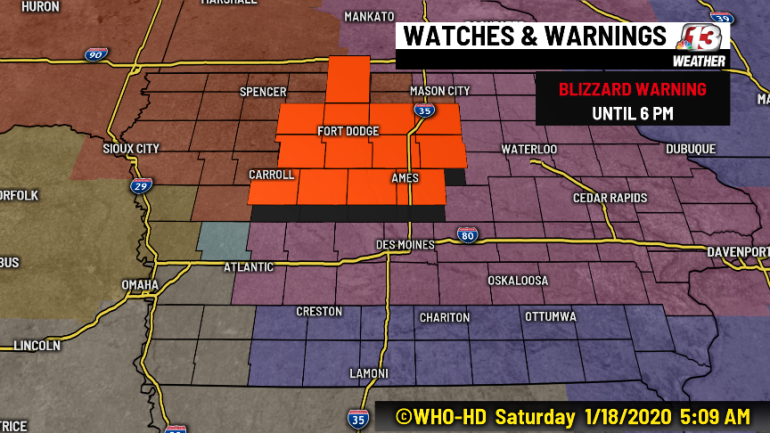 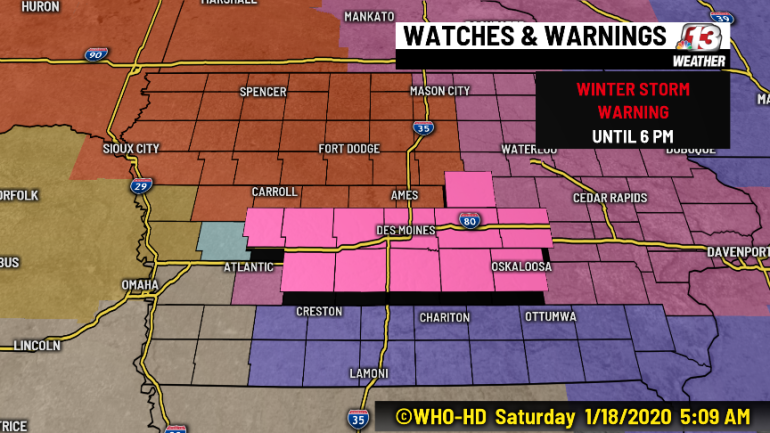 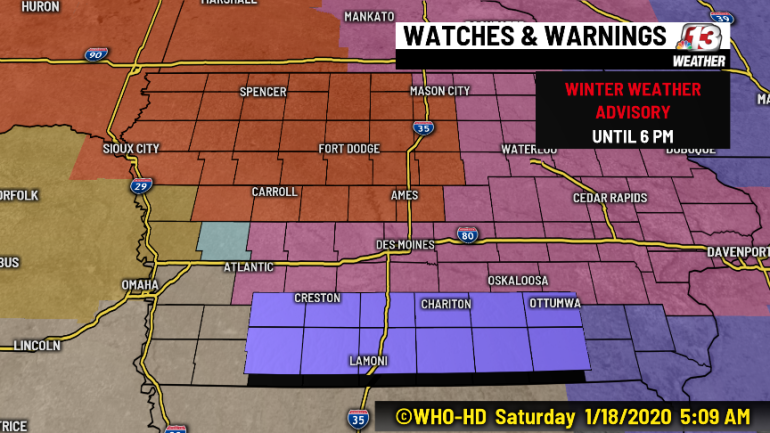 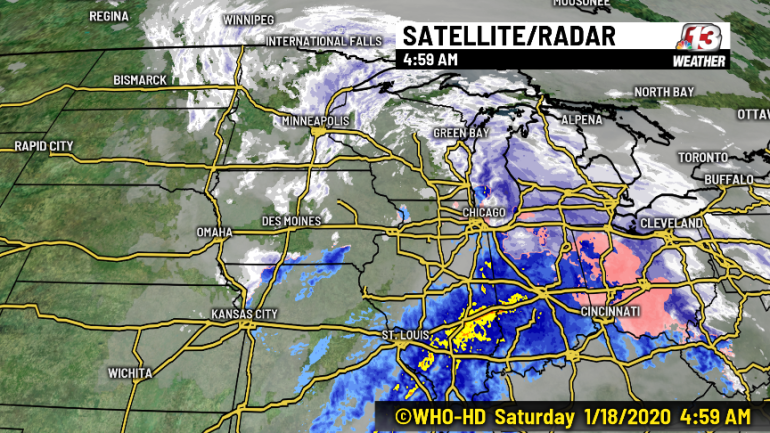 Overnight, dry air worked up through Central Iowa wrapping in around the low. This lead to some warmer air lifting in from the south and the development of some light freezing drizzle through the night and early morning. That dry pocket of air continues to push north and east of Central Iowa and more bands of snow will wrap through with some light snow early this morning. Minor accumulation expected with that.

Next up: the winds will strengthen. Winds will intensify from the northwest quickly this morning. The winds will gust up to 45 mph and will be sustained around 30 mph. This will lead to blizzard conditions across north central and northwestern Iowa today. Visibility will drop under a quarter mile. Counties impacted are listen above. 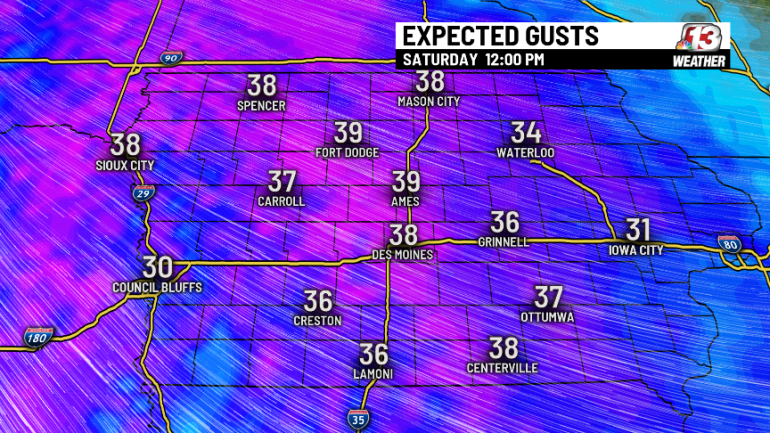 The winds will be strong through Central Iowa as well but after some freezing drizzle early this morning, the snow will still blow around but not as intensely as the northern part of the state. A winter storm warning will remain in effect due to poor conditions.

Snow fell heavy through the day on Friday. Here are a list of a few snow totals: 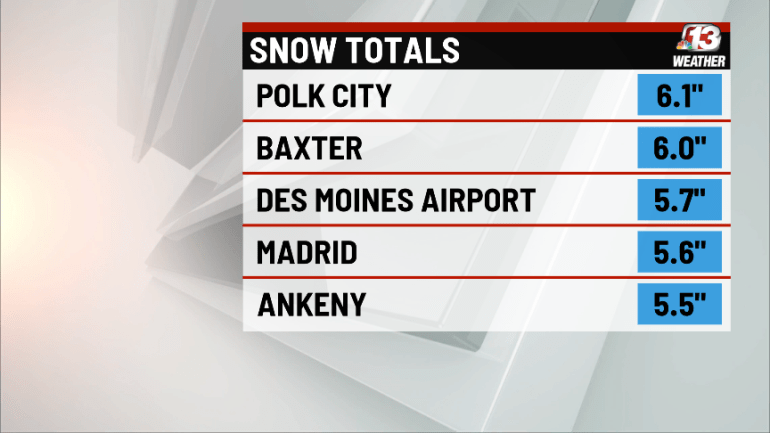 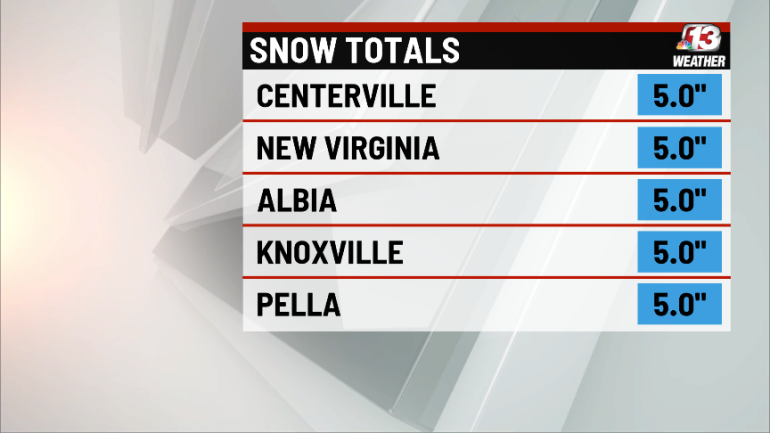 Temperatures will plummet during the day from the low 30s this morning to the low teens by afternoon and single digits by evening. Wind chills will remain below zero. Skies will clear out today and the low in Des Moines is expected to reach -3. Sunday will be another incredibly cold day with a high of only 5, but lighter winds. Monday will also be cold with a high of only 6. 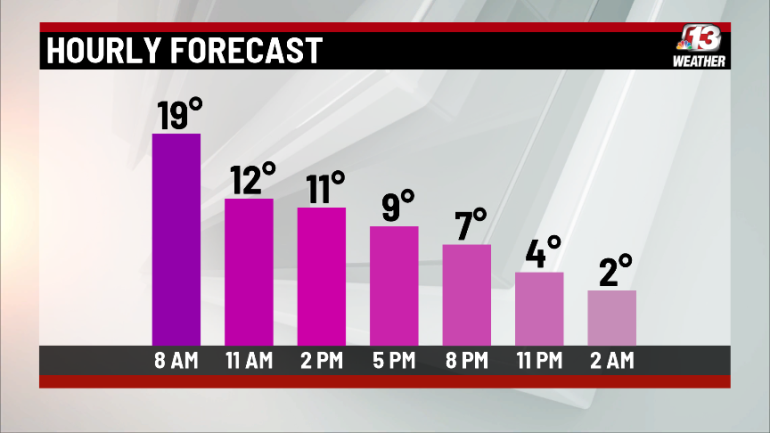 We start a warming trend back to the 30s for the second half of the week, but more messy weather arrives. Another storm system looks to bring rain, ice and snow across Iowa Wednesday through Friday as temperatures hover just above freezing. 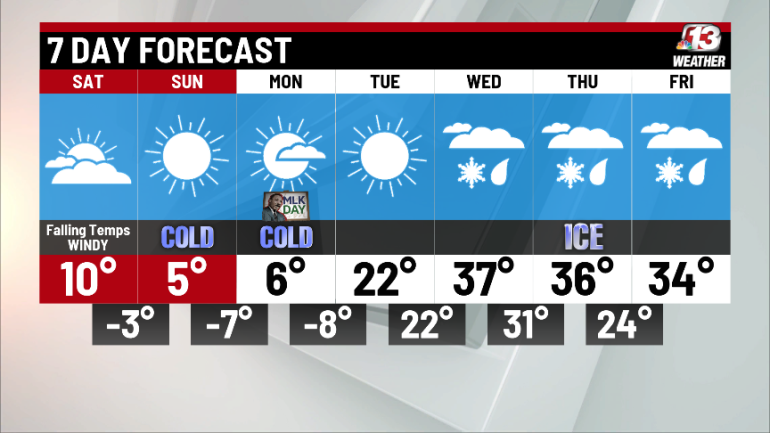 Weather Why: COVID-19 Impact on Forecasting

It's hard to believe but the spread of a virus at pandemic levels can have an impact on the science and business of weather. Not directly, but indirectly through the shut down of business and travel. Meteorologist Megan Salois explains how and why in this Sunday's Weather Why.

Tornado Watch is in place for this afternoon and evening in Central and Eastern Iowa.

Strong thunderstorms are likely, especially south of I-80 and east of I-35. Storms, particularly along the warm front near I-80 will have the potential to produce tornadoes. Be sure to stay weather aware this evening, and keep your 13 WarnMe app handy.

Rain will continue to lift up toward the north throughout the late morning and early afternoon today. Rain is expected to be fairly light in nature and highs will climb into the middle 50s.

The warm front will continue to lift over the state tonight, so isolated thunderstorms are possible. Some storms may be strong to severe across central and southeastern Iowa. The threat is mainly for large hail. Rain totals look to be below one inch for most.